Hey Bubbles is one of my favourite blogs for beautiful photography, kids craft ideas, excellent kids parties and food…oh the food! Anna also happens to be a good friend of my sister…so I can kind of/sort of claim her as my own friend and I certainly love following her online. I am forever repinning her Pinterest pins – some people pin fabulous things don’t they? When I realised she was planning a Magic Faraway Tree party for Miss Matilda I asked (pleaded really) to guest post about it here. Book themed parties are my all time favourite parties. They are so easy to theme as you have visuals, often food ideas and characters to dress up as. Matilda had an Alice in Wonderland party at two which you can read about here. Enough of me – check out this gorgeous party!

Growing up, some of my earliest and fondest memories of reading by myself are reading Enid Blyton’s Faraway Tree books. I still have my copies of the books and knew, once we had our own little girls that it wouldn’t be long before we would read them to our girls.

Bedtime reading is Dad’s job in our household and I think G first read the Faraway Tree series to Matilda when she was about three years old. They’ve read the books together about four or five times now and Matilda really loves them*. Ever since starting Kindergarten this year Matilda has been planning her birthday party and it had to be a Magic Faraway Tree party. At first, I was a bit hesitant because I wasn’t sure many of the other children would know what she was talking about, but her mind was made up. Besides, she assured me that she didn’t mind if the other kids didn’t know who Silky, Moonface and old Saucepan Man were.. she would tell them all about it.

So, a Faraway Tree party it was.

For the invitations we used the illustration from the original book cover, and invited everyone to join us in the Land of Birthdays.

To decorate we bought an illustrated copy of the Enchanted Wood and the Magic Faraway Tree and proceeded to chop them up to make bunting (don’t hate us!). We were lucky enough to have the rain stay away for the party which meant we were able to have the party in the backyard, with the tree house. Up in the tree house we put a big old chest filled with dress up clothes for the guests – fairy costumes like Silky and old saucepans for Saucepan Man. There was a big pile of cushions to go down the slide, and a little squirrel waiting at the bottom to take the cushions back up to old Moonface.

We had the obligatory balloon at the front gate to send party goers in the right direction, and Matilda had to dress up like Fanny. The ye olde cardigan, black mary janes and frilly socks we shopped for untold hours to find stayed on for approximately 10 minutes before she was running around bare foot.

For entertainment, Silky the fairy came to visit and she played lots of games with us and also did some face painting. She was a fantastic fairy, who didn’t think it weird at all that we wanted to call her “Silky” for the day. Even better, she was prepared for the questions and told Matilda that Moonface couldn’t come to the party because he was visiting a little boy’s birthday today, and that she’d had to have an extra shower before she came to the party because Dame Wash-a-lot had tipped her washing water all over her that morning. I was a little worried that Matilda wouldn’t buy into it, but those couple of references were enough to have her convinced.

To eat we had all the important Faraway Tree snacks – Pop Cakes (I know they’re meant to be biscuits, but cakes were easier), Google Buns, Toffee Shocks and Moonface’s Lemonade along with some regular old goodies. To make the Pop Cakes, I made little honey cakes with their centres removed and filled with runny honey. The Google buns were baked doughnuts, with a glace cherry filled with sherbert inside and our toffee shocks were regular toffees with pop rocks sprinkled on top. Not all the food had labels, but we made little tags for the ‘Faraway Tree’ food with quotes from the books explaining what they should be like.

For the birthday cake, Matilda had requested a reproduction of the illustrated cake from the Land of Birthdays in the Enchanted Wood. I don’t think we did too badly, except I completely forgot to add the blue ribbon and bow that I had spent way too long perfecting the night before the party. Oh well, as Matilda said, the main thing is it was yummy.

Finally for party favours we made little notebooks for guests to write their own stories in, paired with a little pencil and some cute erasers. All bundled up with some lollies and tied to our own little Magic tree.

These were handed out quite hurriedly in the end, as the dark clouds were rolling in just as the party was ending. We just had time to bring everything back in from the yard just as the rain was beginning, so thankful that we were able to have the party outside.

*A couple of the mums at the party asked me about whether or not Matilda knew the Faraway Tree stories and asked how she went listening to “chapter books” from a young age. Matilda has always seemed to be ok with listening to the chapter stories and following along, and Polly (who has just turned 3) is just starting to listen in also. Since it’s Dad’s job I asked G if he did anything to help the girls pay attention to the story. He said when he first started reading to Matilda and now with Polly he would often change one of the character’s names in the books to the girl’s names – they would get excited when they heard the same name. Also, we always talk about what happened in the chapter they read last night as we’re eating dinner or some time during the day which seems to help them keep track of where we are up to in the story. 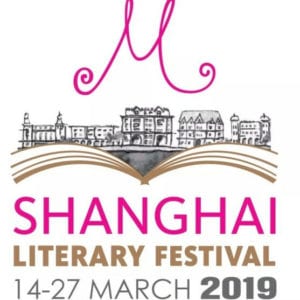 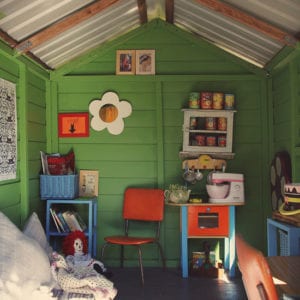 The Cubbyhouse That Became an Art Studio 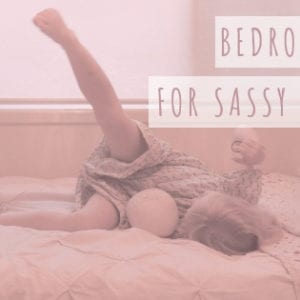 Bedrooms and Books at Seven