On ‘Monsters’ by Stephen Axelsen

Home » On ‘Monsters’ by Stephen Axelsen

This is Part Two of the story behind the story of ‘Monsters’. Part One is here. In Part Two, my very dear friend and talented illustrator, Stephen Axelsen, shares with us how on earth he took up the challenge to continue with illustrating ‘Monsters’, which Kim Gamble began illustrating before his death in 2016. Stephen and Kim were lifelong friends, but it is an epic task indeed to completely dive into the paintbrushes left behind by one of Australia’s greatest children’s book illustrators.

Stephen shared some fairly wiffy cheese and crackers on our front deck last year, and the girls and I had a sneak peek at the original illustrations for ‘Monsters’. Stephen was, as always, self deprecating about his work, but it was immediately apparent to me that this was going to work, and the girls were captivated by Tildy and her monsters, which reminded me ever so slightly of Sendak’s ‘Where the Wild Things Are’. When I read the final published work to ChickPea just last week and told her she was one of the first people to see it, she argued with me long and hard that she’d already seen the book…and I guess in a sense she had…and nearly left the greasy cheese marks on the original art to prove it. Later that night, I pulled the book out of her arms as she slept, to have a better look at it myself, and I spent far too long pouring over the words and images and remembering how I felt when I first read ‘Where the Wild Things Are’ as a child – a little scared but also deeply comforted that others had the same fears about imaginary but scary monsters that I had.

Stephen, you have done Kim so proud, the ‘Kimness’ is evident in ‘Monsters’ but I also love the touch of Stephen. You and Kim were and are Masters of Whimsy and Nonsensical and Anna’s heartfelt text is the perfect base for you two childhood friends to play on with your pencils, brushes and paints. ‘Monsters’ is picture book greatness.

Thanks for agonising over your 800 words and sharing them with us here Dear Stephen!

Tildy knew there were monsters. They sailed in from outside and hid behind the curtains. Moonlight brought them in. Tildy hated moonlight. Mum and Dad said there were no such things. Her aunt and uncle couldn’t see them, and when Tildy wrote to her twenty-three cousins about monsters, only one wrote back saying she shouldn’t eat spicy food before bedtime.

Then a new boy came to school. Hendrik drew pages and pages of monsters when the class was writing numbers. He had a way of dealing with his monsters.

When Tildy dares to stay over at Hendrik’s house, she panics when the moon rises… but together they make the night safe, and Tildy can watch the moon sail through the starry sky.

‘Carrying a Book to the Finishing Line’ by Stephen Axelsen

I spoke to Kim on the Sunday before he died and asked him how the illustrations for ‘Monsters’ were going. He said that he had nearly finished them. A bit sceptically, I confess, I asked how many pages he had left to do. ‘Oh, I’m nearly done,’ he said vaguely.

Kim stopped work on the book the following Tuesday, too exhausted by his illness to go on. He asked his sister to ask me and his daughters to finish the book for him. He died on Friday morning. With Kim’s daughters’ blessing the task became mostly mine.

After his funeral I had my first good look at Kim’s work on ‘Monsters’. He was not ‘nearly done’ as he’d said. Only the first half of the book had been illustrated. But his pictures were a delight to see, and a wonder too, considering the conditions he had worked under. I also had my first good reading of Anna’s story. It was full of the tenderness, the lilt and the twist that I’ve always loved about her writing.
Normally an illustrator will complete a full set of rough, preparatory drawings for a picture book. Then, with the author and publisher’s approval, the finished art is begun.

Kim did not follow usual practice for ‘Monsters’. There was no set of rough drawings. Anna and publishers were willing to trust that there would be a happy outcome. So Kim had been able to ‘luxuriate’, imagining and painting each picture one by one, and taking his time.

For the second half of the ‘Monsters’ I tried to imagine what Kim might have imagined.
I quickly gave this up as too impossible, and trusted that my own ideas would sympathise with Kim’s.

We had had, after all, a long, almost life-long, history of looking at each others work. We shared a very similar sensibility, love of humour, fantasy and the nonsensical. So I drew, literally, on my understanding of the Kimness in ‘Monsters’.

A ‘Kimness’ is a lightness of touch, a love of whimsy, of chooks, of backyards and childhood wonder – the commonplace rendered transcendent. And also of extravagant exaggeration, as seen, for example, with Aunt Beetle and Uncle Roy in ‘Monsters’.

I looked again at the manuscript and noticed that Kim had marked page divisions for a forty page book, eight more pages than the publisher had in mind.

So I had a number of things to do;
– learn to paint using Kim’s technique, style and palette,
– stay as true as possible to the tone and tenor of his pictures

– squeeze the unillustrated part of the story into the actual remaining space.

On the first point, Kim used a pure water colour technique, with just the occasionally bit of pencil outlining for strength.

I’d been working digitally for a decade or more, so I got out my stiff tubes of paint and dusty brushes and began to refresh. In the past I had used water colours too, but always between inked or strong pencil lines, like colouring-in.

I tried to find a paper stock similar to the one Kim was using, but had to do with something similar in the end.

It took me a long time to get started on the illustrations. Initially I’d felt blithely confident that I was up to the task. This much I said to Anna author and the publishers. But as time passed some slight trepidation grew, mixed with a soupçon of fear.

This was a most unusual commission.

I was stepping into very large shoes, schlepping along in  Kim’s oversized footsteps.

It wasn’t until six months after he died that I began drawing in earnest.

Kim thoughtfully appeared in a couple of dreams. He encouraged me to relax and to enjoy myself. This is tried to do, but there were times when I thought “I’m not sure what I should be doing here. I know, I’ll ask Kim …Oh, no, I won’t.”

Once properly underway the job became easier. It was a pleasure to be reunited with watercolours and paper. My wife Jen celebrated the return of the tink of brush on glass water jar.

So, in the end, wearing Kim’s big shoes, with a very generous deadline and lots of encouragement along the way, I did some of my happiest work for quite a while.

Kim was my first and biggest ‘influence’, so I hope he would be happy with my contribution, my fan art, in ‘Monsters’.

After I’d finished my part of ‘Monsters’, I visited Kim’s last studio again. During some random rummaging I found a pad that no-one had noticed before. It was his ‘Monsters’ pad! In it were two completed paintings and some rough sketches. He had left some roughs after all. The two finished, discarded pieces had firm pencil crosses through them, which I promptly rubbed out. I disagreed with Kim that they were unworthy.
Heartfelt thanks to Anna the author, Kim’s daughters Arielle and Greer, and to Allen and Unwin (Anna and Sue) for entrusting me with carrying this jewel to its finishing line. 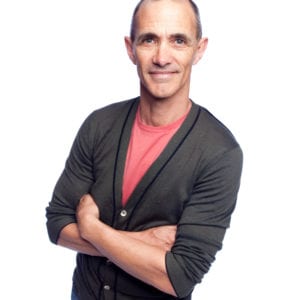