Home » Review of ‘Miss Penny Dreadful and the Midnight Kittens’

An enquiring mind – and mystical mysteries to solve – adds up to adventure in the first book of the new junior fiction series from the truly lovely Allison Rushby.

At Miss Strickland’s School for Girls of an Enquiring Mind, Penny Pickering is forever in trouble for sketching in her notebook during class. All her dreams come true one day when her rather famous and scandalous authoress Aunt Harriet turns up (with monkey and publisher in tow) and asks Penny (or Penny Dreadful as she affectionately calls her) if she would like to join her on an adventure. Aunt Harriet writes penny dreadfuls, which Penny Pickering has been avidly (but illegally) collecting and reading for some time. Given her unusual occupation and penchant for the stranger things in life, Aunt Harriet has had limited interaction with Penny to date, but her parents appear to have packed up and left for Switzerland – and Aunt Harriet is in charge!

Penny soon finds herself headed for Hampshire and a strange place called Mr Toddington’s Museum of the Curious and Absurd where bewitched kittens are said to have tea parties at midnight and mysteries need to be solved.

Author Allison Rushby was raised on a diet of English literature classics, and this shines through in much of her writing – particularly in this new series for readers 7+. The sense of place and time is strong and transports young readers back to England in 1872. The gorgeous illustrations by Bronte Rose Marando add to the atmosphere, with Allison loving the depictions of the naughty kittens!

The idea for this new series simmered away for Allison after she read an actual penny dreadful herself. Penny dreadfuls were very cheap serialised novels or comics that were popular in the mid to late 1800s. They were often sensationalised stories with odd plots and characters coming and going. Allison wondered what sort of eccentric person would be writing such things!

Allison Rushby is a masterful storyteller and I’m so pleased she now has a series for a younger audience. Our youngest readers deserve such rich and magical book offerings. Though sophisticated, Penny Dreadful is engaging and accessible, with gentle humour, whimsical illustrations, intriguing history and mystery elements. There’s a crescendo to a dramatic ending and leaves the reader wanting to slip straight into the next volume.

In my household, ‘Miss Penny Dreadful and the Midnight Kittens’ was read voraciously by The Small Bee (9), I read it aloud to ChickPea (11) and we chuckled heartily and enjoyed reading in an Old English tone. I also reckon The Beekeeper is going to do this one as a read aloud with The Smallest Bee (6). Safe to say our copy is well-loved.

We’re all excited for Book two titled, ‘Miss Penny Dreadful and the Malicious Maze’. More adventures for Penny and her readers!

By the same author:

Join Children’s Books Daily on Instagram for all the new books, reviews and events! 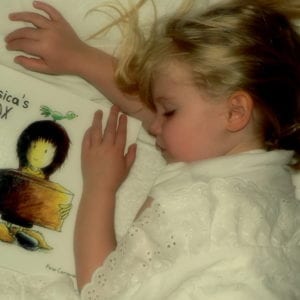