Review of ‘One True Thing’

Home » Review of ‘One True Thing’

Review of ‘One True Thing’

When is a secret not a secret? When your whole life is public.

Frankie is used to being a politician’s daughter, but with her mum now running for Premier, life’s a whole lot crazier than usual. Frankie is expected to participate in media events and the like with her family in the lead up to the election and to be on her best behaviour at all times. All Frankie wants is to lose herself in her music. She relies on her band, and her best friend for escape from the pressure at home. But when the press and the blogosphere hear a rumour – and worse, publish images which implicate her mother in a scandal, the family goes into crisis mode.

To add this book to your home, school or library collection click on title links or cover image. 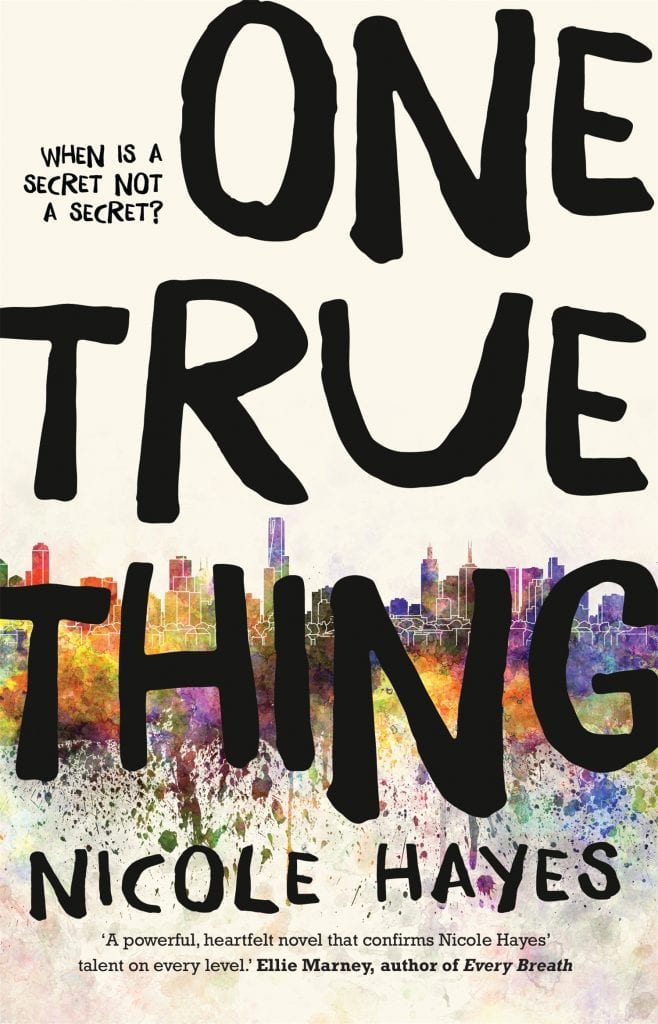 Nicoles Hayes has created an intelligent,  contemporary and original read which will have young adult readers hooked from start to finish. This is a worthy second novel, after the wonderful ‘The Whole of My World’.

Main character Frankie is an authentic teen – complex, flawed, confused, on the cusp of adulthood but not quite there yet. She loves music (I loved all the musical references in the book, my kind of music!),  she has a fabulous best friend Kessie, who has a few secrets of her own and Frankie is torn with emotions over the very swoon worthy Jake. On the home front Frankie is dealing with her mother and the entourage of staff that now come with her mother, her delightful but off-in-his-own-head-writing-a-novel academic father (sorry dad – he reminded me SO MUCH of you!), her overbearing nan who is a fabulous character (possibly my favourite!) and her little brother Luke and his asthma. At times I wanted to whisk Frankie away from the drama of her home, and at other times I wanted to sit her down and say ‘wake up to yourself girl’ – I am not yet a parent of teens but by golly I imagine this ricocheting of emotions from love to frustration is common!

The idea of exploring the injustices and double standards surrounding the treatment of woman in public office and the intersection between politics, the media and privacy in modern democracies, is so very timely and topical. It is something that plays on my own mind frequently, obviously with Julia Gillard, but for me especially in all the dealings I have had with the remarkable Quentin Bryce, former Governor-General of Australia, who was the patron of a literary organisation I was involved in and whom Pud and I had morning tea with on a number of occasions when she was the Governor of Queensland. I found it fascinating and disturbing that this woman, who is without a doubt one of the most intelligent, delightful and compassionate women I have ever met, was reduced in the media to a fashion icon and her personal life was sifted through relentlessly. Granted Quentin has remarkable style and poise, but this is the least newsworthy of her traits I assure you.  I digress! Why do I fly off on tangents here all the time?

Nicole Hayes explores these complex issues without preaching to the reader or alienating the reader. Frankie is such a likeable protagonist and her family are so utterly ‘familiar’ (despite her mother being Premier) that the reader feels instantly at home with these characters despite the subject matter being something many of us will never experience. This to me is the mark of a great writer – one who can allow the reader to walk in the shoes of another and experience, understand and empathise with the unfamiliar.

I see some shortlisings for literary awards in the near future for ‘One True Thing’ and highly recommend it for young adult readers.

There are some great links to the Australian Curriculum in ‘One True Thing’, especially in relation to the General Capabilities of Creative and critical thinking and Ethical understandings and the following Content Descriptors:

How responses of readers and viewers can range from empathetic to critical. (ACELR004)

The power of language to represent ideas, events and people in particular ways (ACELR038)

How cultural perceptions are challenged or supported (ACELR039)

The ways in which authors represent Australian culture, place and identity both to Australians and the wider world. (ACELR040)

The relationship between significant historical and cultural events and figures, and their representations in literary texts (ACELR041)

The degree to which individual points of view, experiences and contexts shape responses to texts(ACELR001) 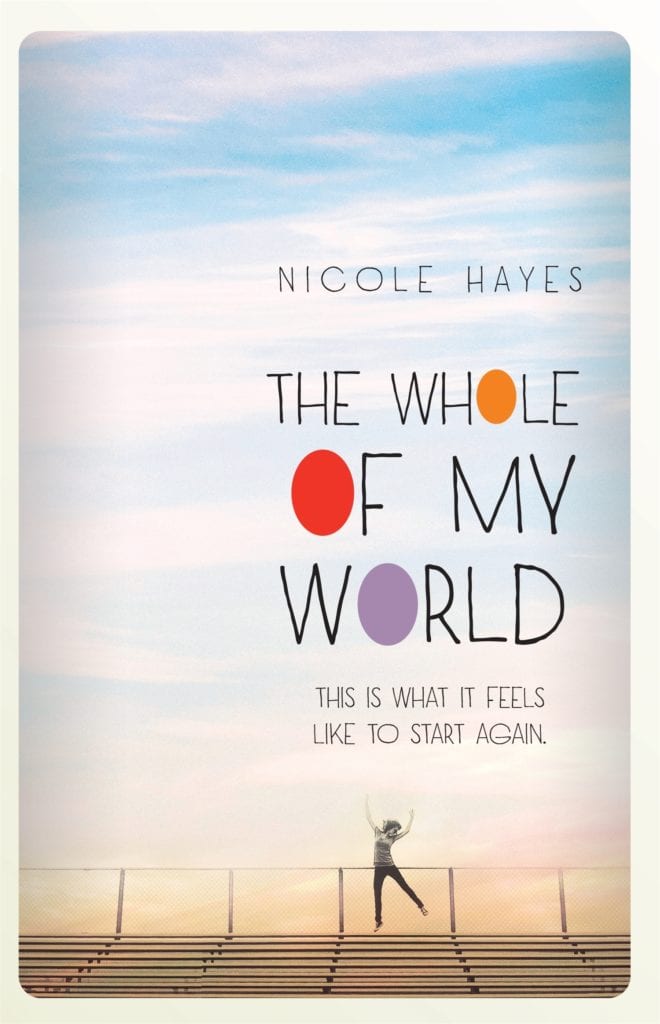 An unputdownable novel for anyone who’s ever loved or lost, drawn a line between then and now, or kept a secret that wouldn’t stay hidden . . .

‘Today I am free. No guilt for who’s missing, what’s been left behind. My face aches from smiling in the wind and my voice rasps from all the screaming, and I know that it’s been forever since I’ve felt so completely alive.’

Desperate to escape her grieving father and harbouring her own terrible secret, Shelley disappears into the intoxicating world of Aussie Rules football. Joining a motley crew of footy tragics – and, best of all, making friends with one of the star players – Shelley finds somewhere to belong. Finally she’s winning.

So why don’t her friends get it? Josh, who she’s known all her life, but who she can barely look at anymore because of the memories of that fateful day. Tara, whose cold silences Shelley can’t understand. Everyone thinks there’s something more going on between Shelley and Mick. But there isn’t – is there?

When the whole of your world is football, sometimes life gets lost between goals. 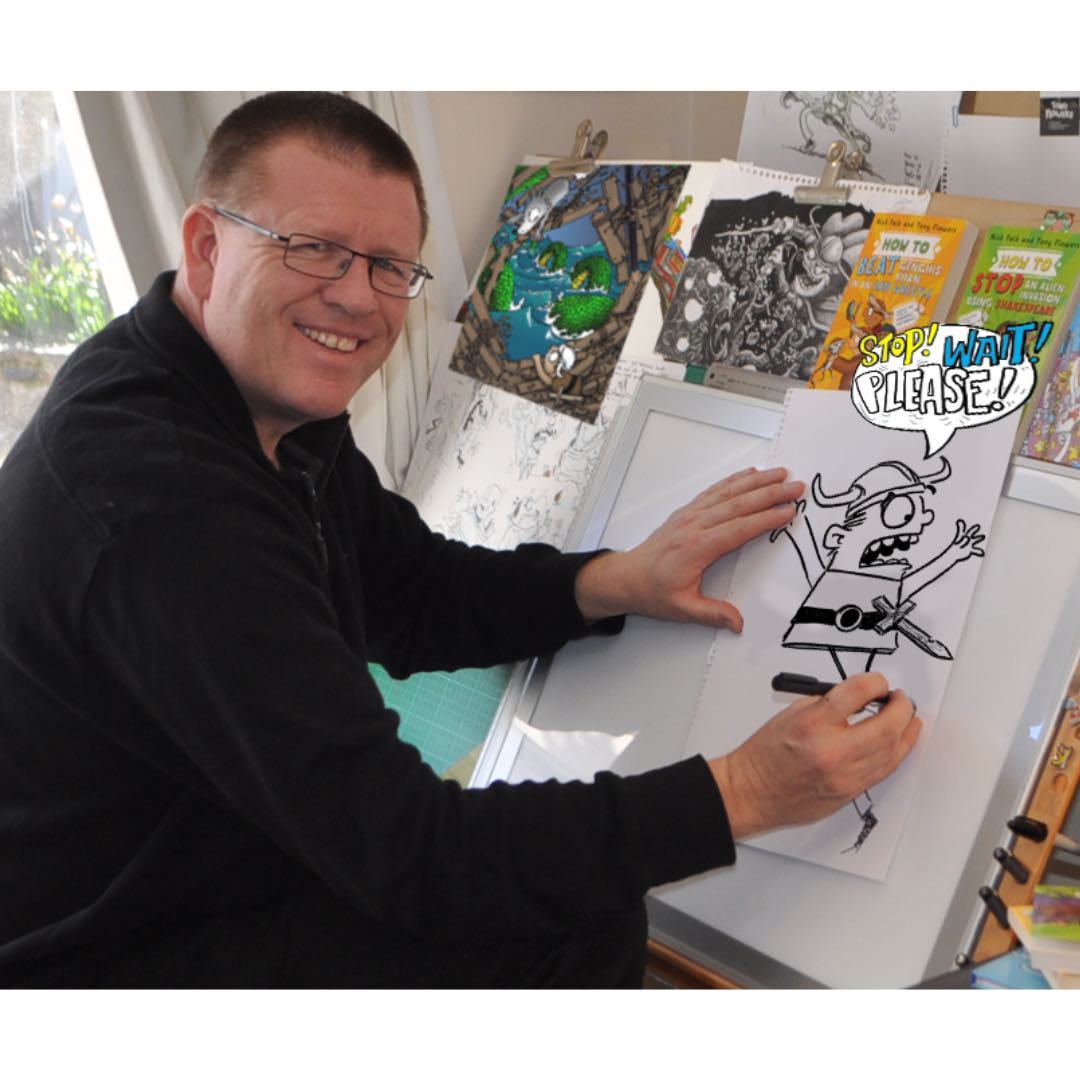 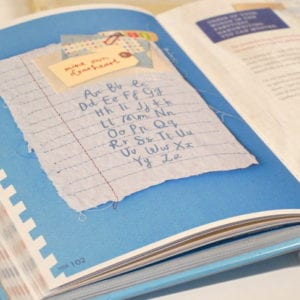