Review of the ‘Polly and Buster’ Series

Home » Review of the ‘Polly and Buster’ Series

This is ChickPea’s first official review on the blog and it’s appropriate that it be of ‘Polly and Buster’ as she’s deeply in love with this trilogy from bestselling author Sally Rippin. ChickPea has done the typing of the main review, I’ve added the book details and the intro to her review. The third and final instalment is not out for a few weeks yet, but I’d be pre-ordering for immediate delivery!

ChickPea: Mummy? Can I use extra punctuation in my review? Like brackets and semicolons and the dot, dot, dots?

Me: Do you know how to use them?

ChickPea: well I’m at the bottom of the punctuation pyramid…so maybe?

Is it good she’s at the bottom of the pyramid? What is this pyramid? Anyway she’s had a crack at the punctuation and she’s probably done better than I have with apostrophes. The Polly and Buster trilogy is tightly packed with emotion and adventure and tales of family, big feelings and friendship which trumps all. It’s messages are as relevant for young readers as they are for the grown ups and I have to admit to tearing up more than a few times in these books. As with all Sally Rippin books for newly independent readers, the design of the Polly and Busters books is without fault, from font type and size changes, the whimsical illustrations which break up the text and the fast paced story which keeps pages turning. Outstanding.

Take it away ChickPea (punctuation risks and all)

I like that the ‘Polly and Buster’ series are fantasy and stuff and the books have really, really big problems like a big fight between monsters and witches and two friends (Polly Proggett and Buster Grewclaw) who are a monster and witch who aren’t really allowed to be friends. Even though everyone thinks that they shouldn’t be friends, they don’t agree and so they go on lots of adventures with each other. In Book One there is a fight between witches and monsters and the characters think there is an unfair advantage because witches have wands and powers and magical things and the monsters don’t have that advantage. I agree with the monsters and really…they just shouldn’t start a fight anyway.

I really like the part where Polly Proggett, who is the main character and a wizard (who is Polly’s father) puts the gorvan to sleep in the Hollow Valley Mines and she sees her father in there but as a ghost, because her dad died. Polly has three special stones that her father gave her and they and the evil witch Mrs Halloway, also a main character, has some too! Polly Progget, Miss Spinnaker, Mayor Redwolf, the monsters and witches, the gorvan and Mrs Halloway all fight. If you breathe in the gorvan’s breath you get all evil and I think Mrs Halloway breathed their breath when she went to the Hollow Valley Mines and so she starts a war and in the third book Polly is going to save the day.

I like the adventures and the friendship and sometimes I get so excited that I just want to read more and sometimes I get really scared but I know that no book ends badly unless it ends on a cliffhanger like in ‘Peski Kids’ or some adult books. I feel like I could be friends with Miss Spinnaker because she seems really nice. I like Polly but I wouldn’t want to get too close or angry with Polly because when she gets angry she shoots sparks from her hands. Buster shrinks when he feels sad emotions and his fur turns pink and that’s what feeling sad makes you feel like you do (you feel small), but humans don’t actually shrink. When Buster gets hungry he turns grey and he’s always hungry which is like me, but I’m not grey, I’m more peach coloured.

The very best thing about these books is how adventurous they are but the adventures all have a cool ending. I also like the illustrations by Sally Rippin because you can see the expressions on the characters faces and the illustrations are funny and weird. I would recommend them for children aged about six and up because they are too scary for younger kids. Maybe seven would be better actually. 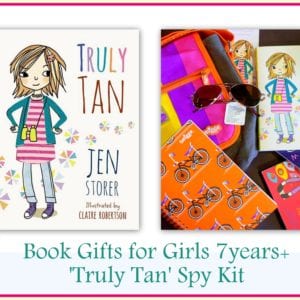