There has been much talk of dinosaur play and dinosaur books on here of late. So to balance that out…now for some fairies!

PudStar is at that age where fairies are high on her list of likes. Sometimes I wish she’d play with her Tonka Trucks, train set or Lego a bit more, but I know it’s just a stage and I adored fairies and I turned out okay. Okay I am slightly left of normal, but that’s okay too. There are lots of books written about fairies, but few of them really shine and sparkle with fairy dust greatness. There is nothing wrong with reading the formulaic fairy books (aren’t we all just grateful our kids are reading). But sometimes it’s nice to find a fairy book that has a bit more spark, imagination and spunk about it.

One of my favourite fairy books is ‘Alice the Fairy’ by David Shannon (of ‘No David!’ fame). Alice is a ‘temporary fairy’ with a nose for trouble. It’s a great story about a little girl with a vivid imagination and a patient family!

PudStar doesn’t really mind the quality of the fairy story at this stage; she’s just pleased to see wings and fairy dust in action.

Both girls are big fans of their dinosaur garden and can spend hours digging in it, but when Pud does not really want to get all dirty, or she wants to escape to a world of miniature people with wings and wishes…her fairy garden and a cushion it is.

My excellent friend Michelle and I had been madly pinning fairy gardens on Pinterest for a while, and when we had a few days together recently we hatched a plan to make both our girls a fairy garden. Of course we probably should have involved them…but hey we also wanted them to look pretty…shallow? Perhaps. Anyway we made the base and they added the bling and character.

We did them at my place one day when we were child free, using old pots and lots of child friendly easy care plants like succulents…you break it, it just re grows…perfect. Added some flowering annuals, logs and rocks and we were done. Then we realised they were really heavy and Michelle had to get hers into the boot of her car.

Both the girls were exceptionally excited about their fairy gardens, and PudStar painted a house for her, and found some ‘excellent’ (fairly ugly) bits and pieces on our Wynnum op shop day. Apologies again to Mel for scoring the truly excellent 50cent mini tea set, used in the fairy garden, the dinosaur garden and Strawberry Shortcake’s house. One day you will find one Mel…

This ‘lovely’ piece of 20 cent plastic is a bed, and I just noticed it has one of those thingos in stuck in it…blow away and wish or something?

PudStar loves writing notes to her fairies, and spraying her fairy plants with her spray bottle (so she doesn’t drown them with a water can). She often finds snails in her garden, which she tells me are the fairy pets.

The walnut babies also now live in the fairy garden for some of the time, along with whatever mini dolls, horses or dogs can be found.

The fairy garden has been a hit…even if I did make it pretty to start with, it’s definately now got PudStar style stamped all over it. An update on the fairy garden is here. 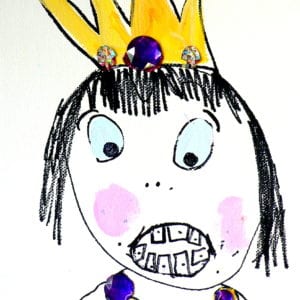 Every Writer Needs an Office