How to Host a Ninja Book Party!

Home » Book People » How to Host a Ninja Book Party!

How to Host a Ninja Book Party!

I’ve had an afternoon full of ninja moves, ninja illustrations and general ninja chit chat, at the Story Arts Festival Ipswich (SAFI) Ninja Book Party. Enormous thanks to Tony Flowers, Peter Carnavas and Damon Young who presented with enthusiasm and shared their skills with our young audience. 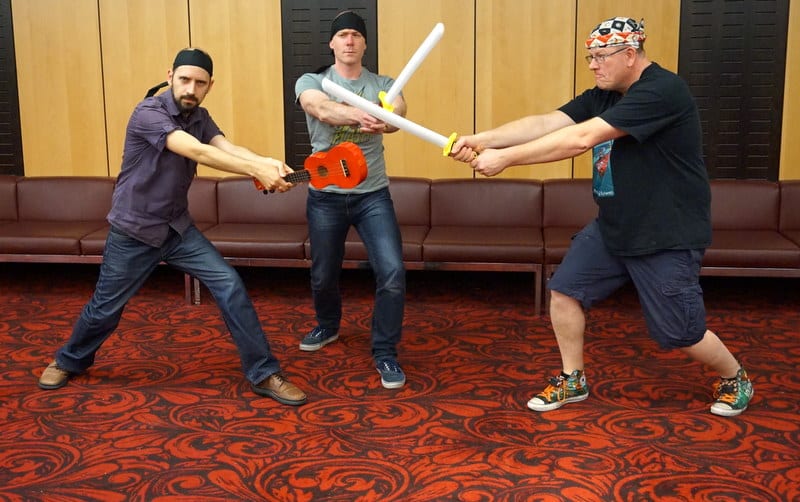 I cannot put into words (mainly because I am so tired) how utterly inspiring (and fabulously fun) author and illustrator events can be for young and old alike. This week at the Story Arts Festival Ipswich, PudStar has met and done workshops with, some of the biggest names in Australian children’s literature. I overheard her talking with her friend and listing the authors she had met at SAFI and her friend asked in a hushed tone, ‘what about Nikki Gemmell?’ to which PudStar replied, ‘well she’s not at SAFI this year, but I’m meeting her really soon’ and they both squealed, jumped and hugged. She’s actually not meeting Nikki Gemmell anytime soon, and we’ll discuss the importance of telling the truth tomorrow, but right now I’m just enjoying her excitement.

Children’s literature authors and illustrators are as big as movie stars to young readers – and the teacher librarians who swoon over them. Literature festivals like SAFI and events driven bookstores like Avid Reader and Where the Wild Things Are, make celebrity authors and illustrators accessible to young and old fans alike and this was the most beautiful part of this afternoons Ninja Book Party for me. Those three ninja characters creators – and the other children’s authors who were floating around, were there for those children. They played with them, they read with them, they taught them some illustration techniques, they allowed children to climb ON AND OVER them and they ate cupcakes with them. They left a lasting impact on the those children and hopefully inspired them to read some books, do some writing and create some art. 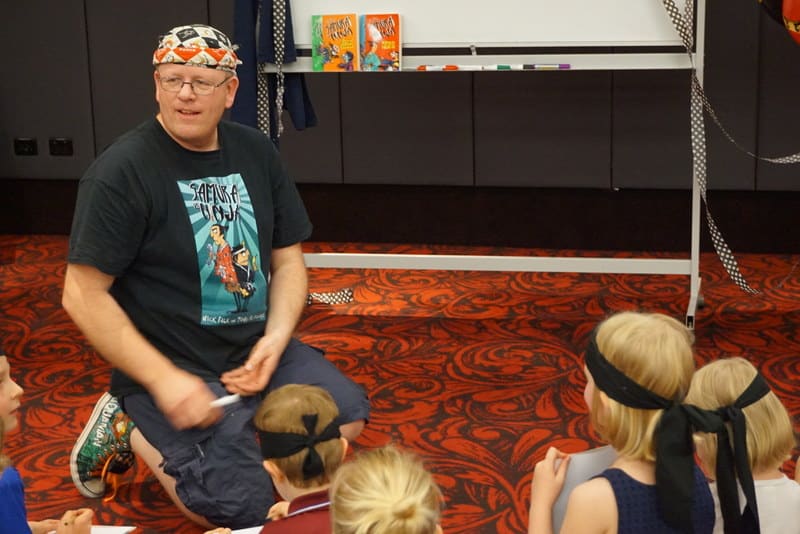 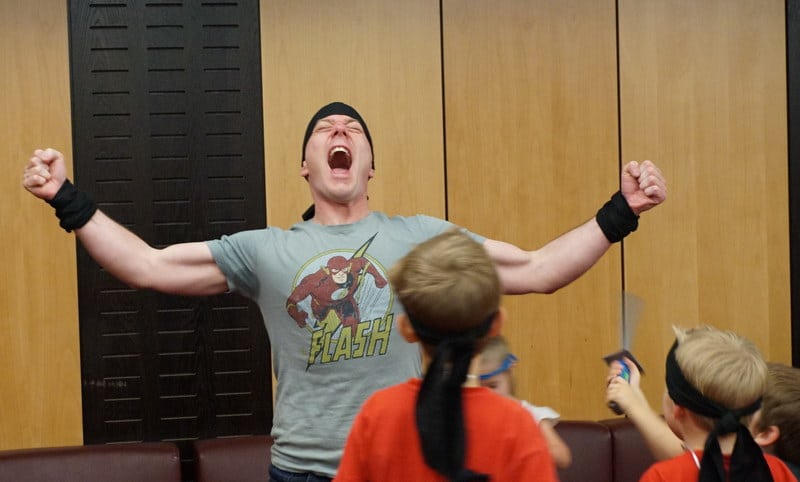 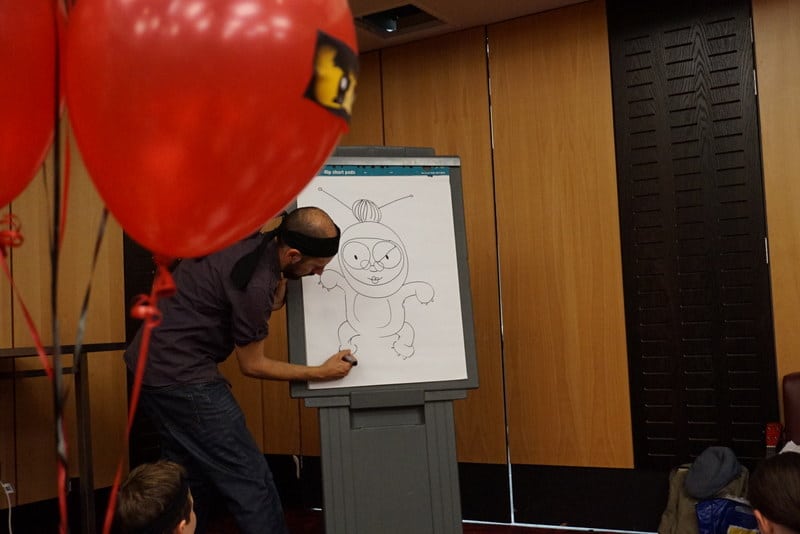 The best parties are, in my opinion, based on books…and if you want to host your own ninja book party you’ll first need some ninja books like ‘My Nana is a Ninja‘ and the ‘Samurai Vs Ninja’ series, because books make theming parties so.much.easier.

To add these books to your home, school or library classroom click on title links or cover images. 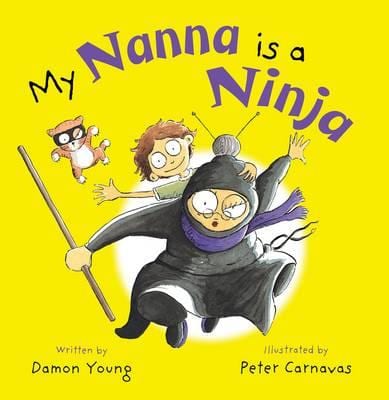 Now for your average ninja book party you’re not going to Throw in some balloons with ninja eyes, ninja head scarf thingos (I’m sure they have a name?), ninja star decorating and ninja colouring and you have the makings of a pretty cool party.  Party go-ers can work out their ninja name (plenty of printables online) and can of course do ninja moves – in this case the ninja movements were taught by a philospher who also happens to write children’s books – Damon Young! 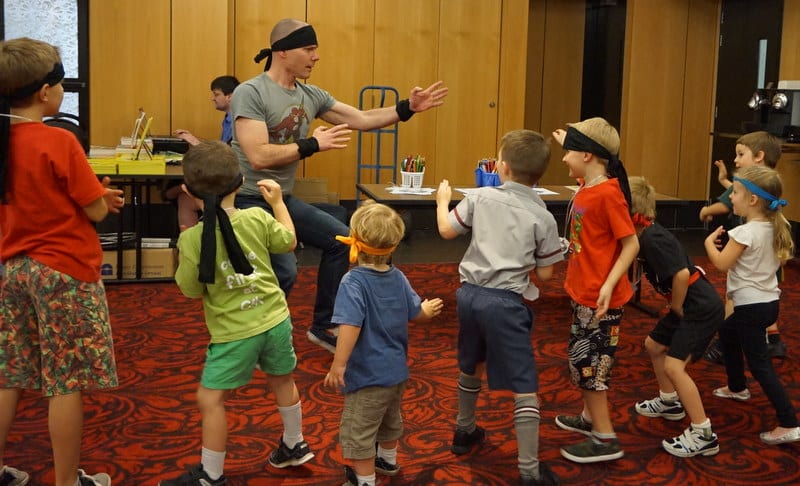 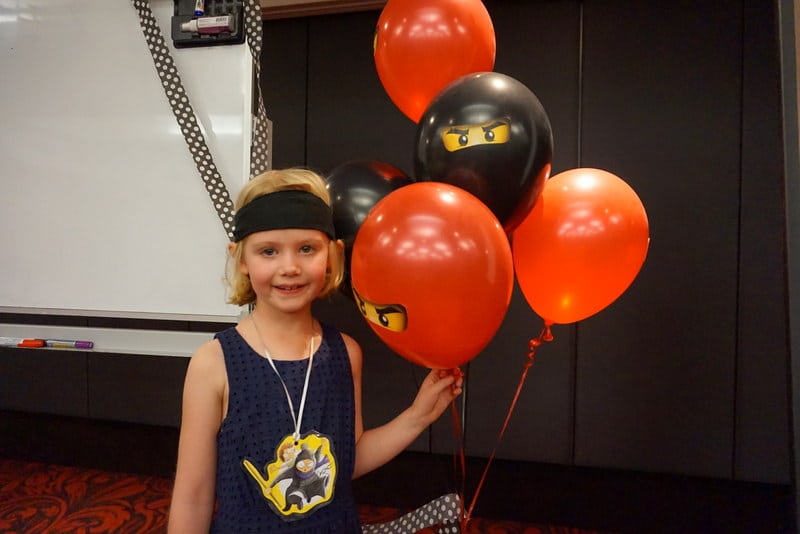 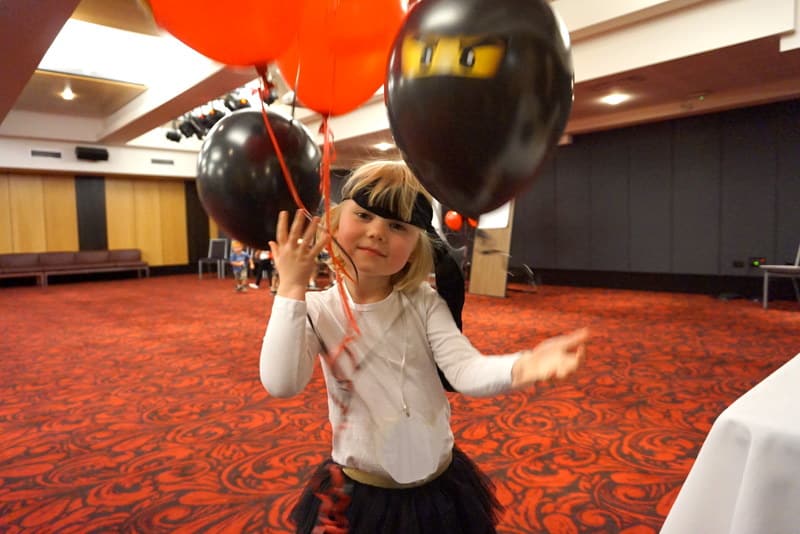 Tony Flowers kindly allowed me to use his images for ninja cupcake toppers but there are plenty of printables online. For birthday parties for my own children I do often use book images or covers on cakes and cupcakes – for public and school events I always seek permission – such a good librarian! 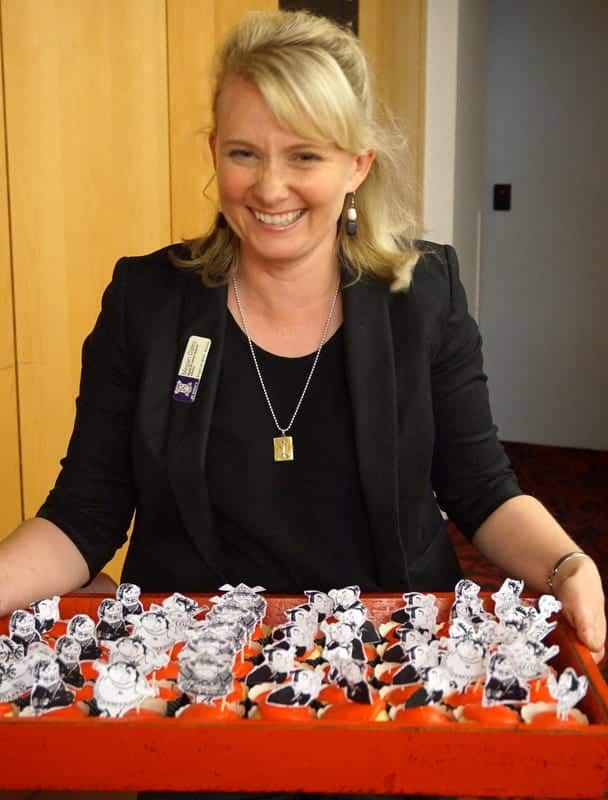 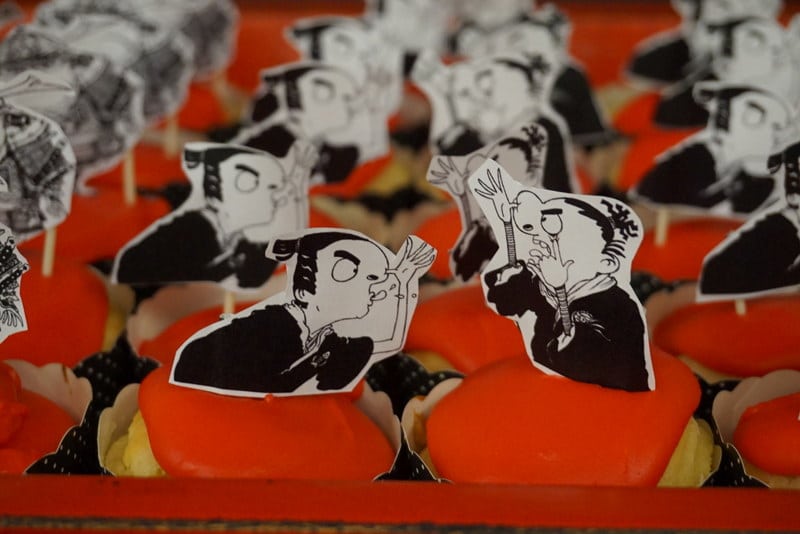 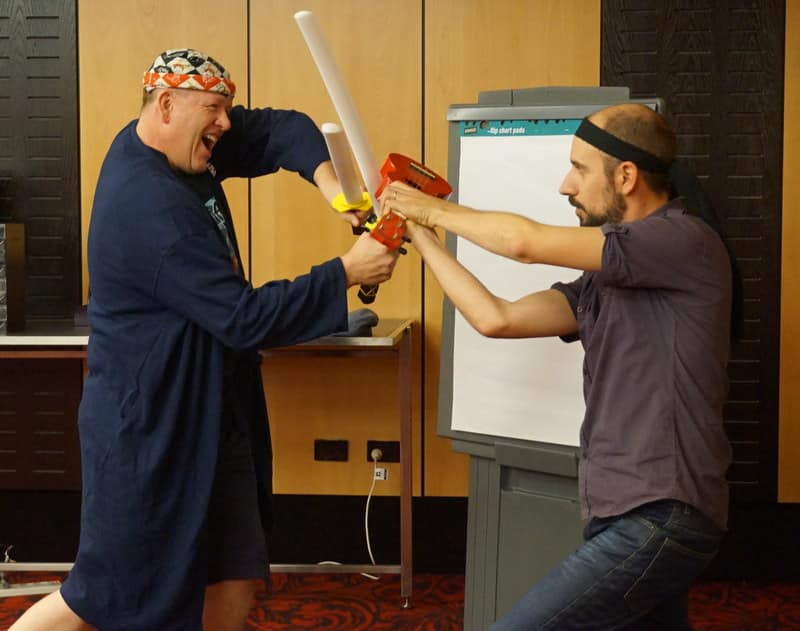 And now to bake the cupcakes for Thursdays Terrible Lizards Party – it’s a week of bookish events for me!

Where the Wild Things Are Party

Pearlie in the Park Party 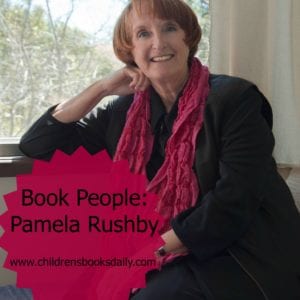 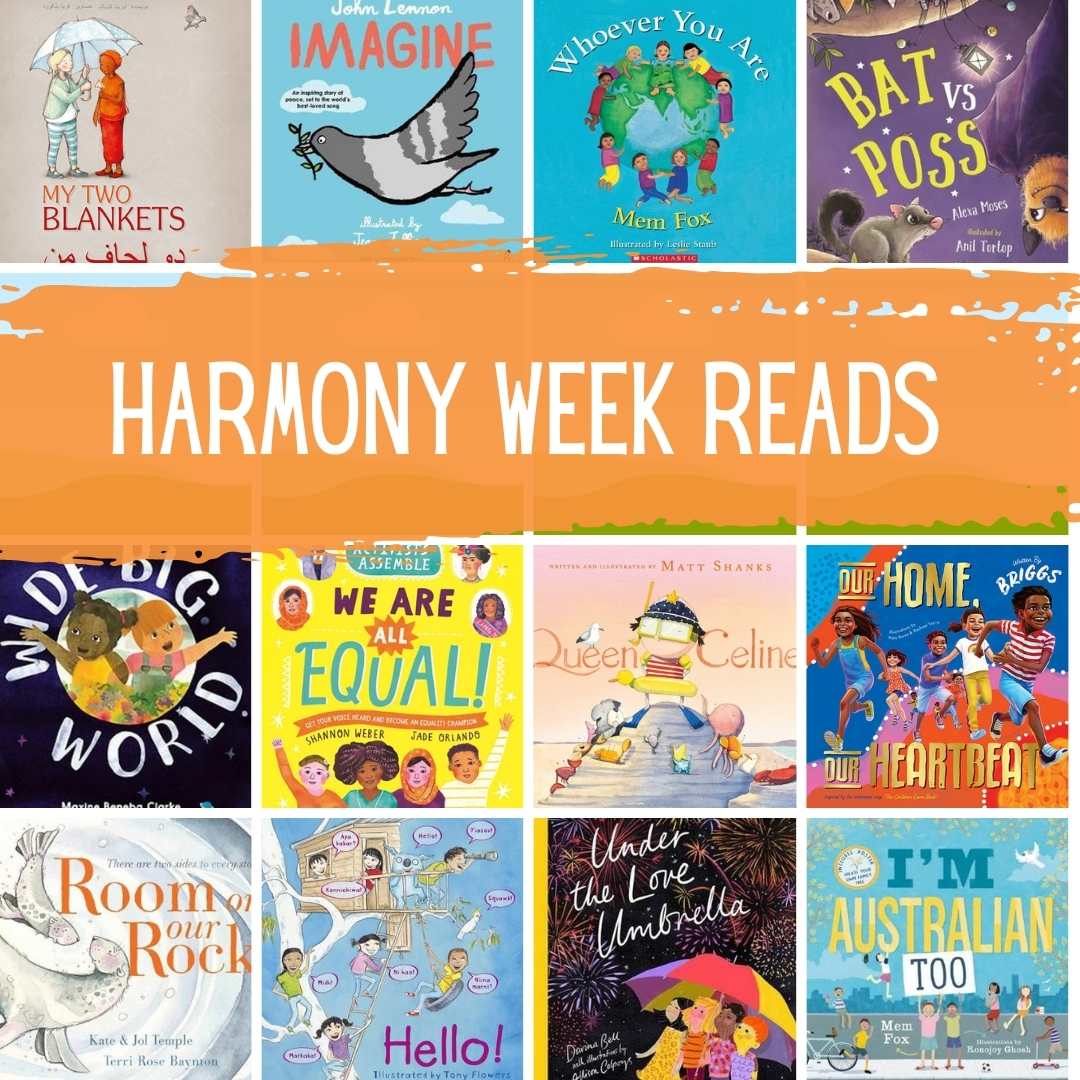 Everyone belongs: Books to read for Harmony Week 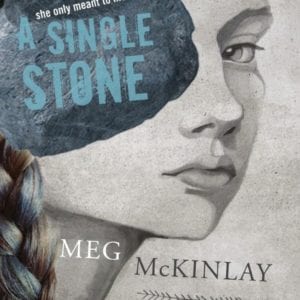 ‘Charlie and the Chocolate Factory’ at QPAC